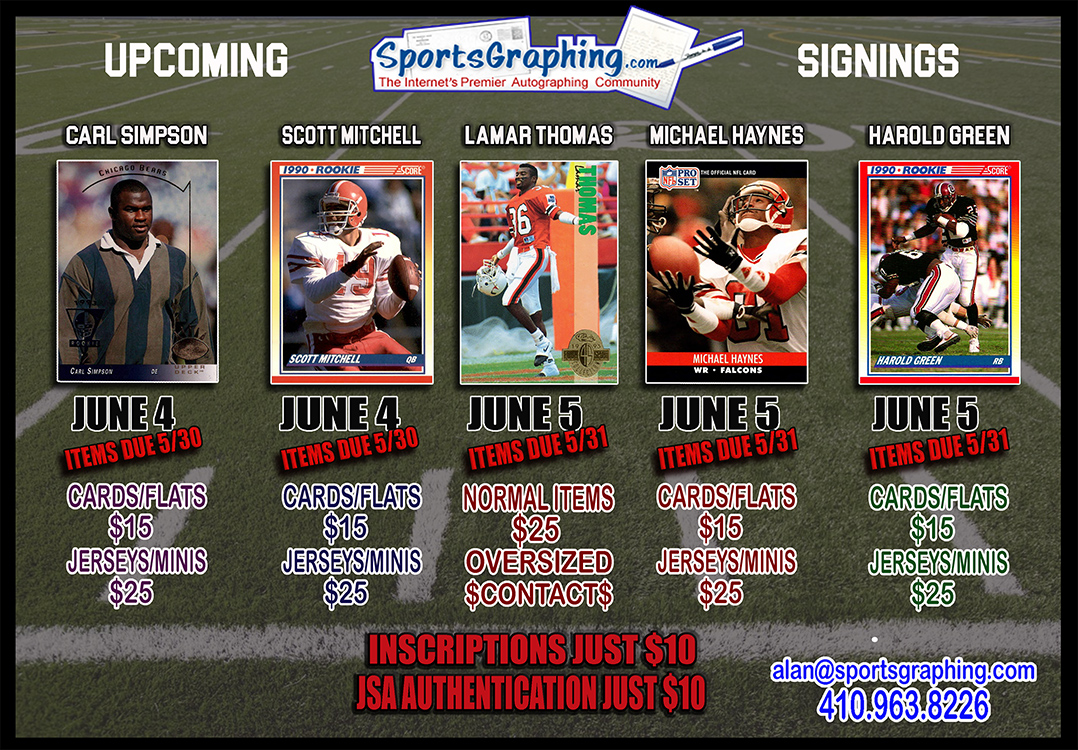 SportsGraphing is excited to announce our private signing with University of Miami 2014 HOF Inductee Lamar Thomas. Items/orders must be received no later than May 31th.

Lamar Thomas is a former NFL player and former color commentator. Thomas played college football and college basketball and ran track at the University of Miami before being drafted in the third round of the 1993 NFL Draft by the Tampa Bay Buccaneers. He is a University of Miami Sports Hall of Fame inductee, class of 2014. With the Miami Hurricanes Thomas set a then-school record for most receptions in a career (later eclipsed by Reggie Wayne). Thomas was interviewed about his time at the University of Miami for the documentary The U, which premiered on ESPN.

Thomas played eight seasons in the NFL as a wide receiver, three with the Buccaneers and five with the Miami Dolphins, where he had his greatest success.

NOTES: All cards/photos will be signed in Blue Sharpie, mini helmets/jerseys in Black Sharpie unless instructed otherwise.

IDIOT PROOF YOUR SEND IN ITEMS
1) Include something with your item(s) that has your NAME, PHONE #, EMAIL ADDRESS, and ADDRESS in case things are unclear as to how you want things signed.
2) Put a small Post-It on the item with your name and where you want the item signed and the color of marker or pen.
3) When requesting an inscription, WRITE IT OUT CLEARLY so it gets done properly.

SASE RULES - We will accept a SASE but it MUST have return tracking clearly on your SASE.
Insurance by request. Add $3.50 per $100 value for all insurance. We are is not responsible for lost or damaged items.

BUMP - We need some more items to hit the signing minimum so I am extending the date out 2 weeks to accommodate hopefully more collectors. The new signing date is the weekend of June 18-19th. Hit me up with any questions. Alan alan@sportsgraphing.com 410-963-8226
You must log in or register to reply here.